Since acquiring my first telescope nearly 40 years ago, I have dreamed of capturing images of the Andromeda Galaxy (M31) and Orion’s Nebula (M42). Well, finally the day, or rather nights, came for collecting the light from these distant beauties.

This post describes the location where the presented images were collected and the settings used to collect them. In addition, two observations are included.

My home suffers from skies polluted with city lights, lights from a nearby high school, and of course lights from neighbors. So my search for dark skies began. Living in Utah, dark skies are within an hour or two drive, but finding a night or two free from other activities, clouds, and a bright moon is not easy.

On November 9, 2018, my wife and I took our RV and telescope to the Wedge Overlook Campground in Utah. The outing and location are described on our Trailer Travels blog. This location is quite dark, our weekend was free, and there was no moon. The only challenge was the temperature which dipped well into the 20s. However, for astrophotography, this wasn’t much of a challenge. I simply framed the objects, started the exposure sequences, and went into the RV and watched movies in a warm environment; it was great.

The equipment used to collect the presented images is described in my First Attempt post. For the Andromeda Galaxy (M31) images, I collected 100 sub-exposures. Each sub was exposed for 30 seconds for a total exposure time of 50 minutes. Keep in mind that these images are shot at f/2 using the CPC 1100 and the Hyperstar system. This would be equivalent to 100 sub-exposures with exposure durations of 4 minutes each on an f/5.6 system, about 6.7 hours of total exposure time.

I’d love to try many more exposures and many more exposures at shorter exposure times and compare results. However, on this outing, I tried collecting light from many objects rather than focusing on a few. I won’t repeat that mistake. Each sub-exposure was collected with a camera gain of 93 (unity gain) and an offset of 12.

In addition to the sub-exposures described above, flats, darks, and bias frames were collected and processed as described in my previous post. The resulting image of the Andromeda Galaxy (M31) was processed in Adobe Camera Raw and finished with Adobe Photoshop.

As before, flats, darks, and bias frames were collected and processed as described in my First Attempt post. The result was two images of the nebula that were processed in Adobe Camera Raw and finished with Adobe Photoshop. Finally, the two images were selectively merged. The image created using the 5-second subs provided the core of the nebula and the image from the 30-second subs was used to provide the subtle nebulosity near the outer edges of the nebula.

In the future I will focus my efforts on one or two objects per night and try an array of exposure times, a number of subs, etc. rather than trying to acquire data for 5 or 6 objects. The time required to frame, focus, and take samples wasted a lot of time and in the end only resulted in two usable images.

You may notice that the shape of the stars in the image appears a bit triangular in shape. I believe this is due to a collimation error in my optical path. I have acquired a laser collimator and Hyperstar attachment and will use them to test my hypothesis and correct the problem if it exists. Hopefully, my next images will be better than those presented here. 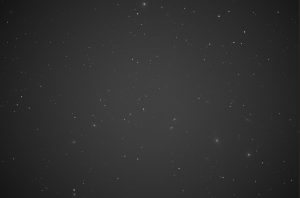 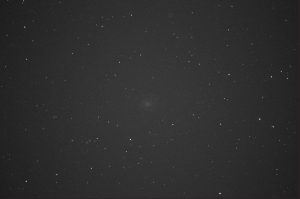 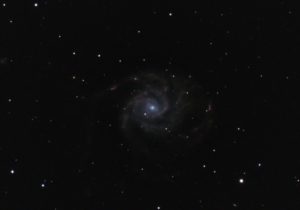