In my previous post I declared my intent to refresh my technical skills through the development of an amazing doorbell, myDoorbell. In this post I describe a doorbell system found in a typical U.S. residence and discuss how this influenced the design of myDoorbell.

A typical doorbell system consists of several components: a doorbell button, a ringer mechanism / solenoid, and a doorbell transformer. These components are connected as illustrated in the following schematic.

When the doorbell button is pressed, AC flows through the solenoid causing it to strike a metallic bar tuned to create the expected “ding” sound. When the current is removed the solenoid is pulled back quickly by a spring, causing it to strike a second bar resulting in the anticipated “dong” sound. Many doorbell buttons have associated lamps to facilitate finding them in the dark. Like the button, the lamp also closes the circuit and energizes the solenoid. However, the resistance of the bulb limits the resulting current to a level that does not cause the solenoid to strike the metal chime.

One design decision I made early on was to enable myDoorbell to function with the existing doorbell button and transformer. In other words, myDoorbell would replace just the ringer portion of an existing system. In a common installation a pair  of wires from the button and a pair of wires from the transformer are brought to a wiring box where the ringer is installed. This is illustrated in the figure below. 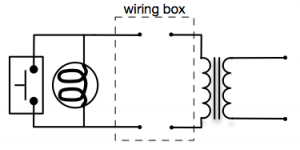 The resources available in the wiring box are the connections to the push button, that requires 16V AC to power the lamp, and 16V AC. In my next post I’ll begin describing the design of myDoorbell based on the identified constraints and resources.