This is the tenth and last post describing our RV power system. Our previous post described the final design and some of its characteristics. This post summarizes the system’s performance on our first overnight outing. First, for convenience, we briefly describe the final system. Next, we describe our outing and associated conditions and finally explain the system’s performance.

Our power system fits within the left pass-through storage area, illustrated in Figure 1.

We spent two nights in Red Canyon Campground in southern Utah in late April. This outing is described in more detail in another post. The daytime temperatures were in the mid-60s, and the lows were in the low-20s. The sun was bright the first day. We had a couple of hours of good sunlight on the second day and then overcast with rain.

With the nighttime temperatures in the 20s, our furnace periodically ran to keep the trailer at approximately 65 degrees. In addition, we watched television for several hours at night, used lights, and charged a couple of phones, watches, and an iPad. With all of these devices running and charging, we consumed nearly 80 Ah of our 360 Ah battery bank. Our batteries were replenished after just a few hours of good sunlight.

Early in the day, the solar charging system produced about 360 W. I decided to check the cleanliness of the solar panels and was shocked to find them coated in mud. It was thick enough that I could not remove it without a significant amount of water. After cleaning the panels, the system produced just over 500 W. A little water and elbow grease pay off.

After a 5 mile hike, we returned to find our RV an uncomfortable 81 degrees. We flipped on the AC and set the thermostat to 75. The AC drew a constant 1100 W and ran for approximately 30 minutes. Later that evening, the temperature in the RV dipped down to about 68 while we were still up and around, so we turned on the electric fireplace. That unit drew nearly 1400 W but warmed us right up. We tried a few other electric devices to see the practicality. The refrigerator on electric power drew about 22 A, my wife’s curling iron was no big deal at 200 W, and I’ve tried the microwave before at just over 1000 W.

It is a pleasure to use all of our systems without generating noise. We can use the AC, microwave, and TV after campground quiet hours without worrying about bothering others. However, it is funny watching us adapt to this new world. Are we content toasting our bread in the broiler? Of course not; we need a toaster because we can have one! I am sure we’ll add a hairdryer and who knows what else. Nevertheless, I am pleased with the outcome and the comfort it has added to our lives.

This is the ninth post of a series of articles documenting and describing our RV electrical upgrade. Our previous post in this series described a simplified model of our battery bank, the wiring of our system, the resistance contributed by each component and associated cables, and the expected system voltage drop. Our goal is to keep our voltage drop to 2.5% or less as recommended in Victron’s Wiring Unlimited. This post describes the outcome, reports actual voltage drop measurements, and compares these with those calculated previously. Finally, we evaluate our final results regarding our initial goals, point out a few things we’d do differently, and conclude. For those interested, this page lists the parts, equipment, and tools we used to build our power system.

Figure 2 includes the measured resistance of each cable and component, such as the 400 A class T fuse, battery disconnect switch, shunt, 400 A mega fuse, and the Lynx Distributor busbar system. These resistances are assumed to be worst-case values as we rounded up measurements and the measurement device’s connection to each component was simply the tension applied by the spring-loaded probes. The total measured resistance of components and cables around our system’s critical path is 1.77 mΩ. With this resistance, we concluded that our system should be capable of providing just over 180 A while remaining at or below our 2.5% voltage drop goal.

After considerable cold winter work, our design came to fruition. As previously described, our power system fits within the left pass-through storage area, illustrated in Figure 3.

We used a Victron MK3-USB device to program the inverter/charger for our specific setup and then used the remote console provided by the Cerbo GX to monitor the initial startup. After turning on the battery switch and the solar PV switch, the system immediately started providing inverted power to the RV, and the solar charger started charging the batteries. Next, using a halogen light and my wife’s toaster, we applied some moderate load to the system and took some readings, found in Table 1.

The system experienced a 0.24 V voltage drop with a 157 A load. A voltage drop of 0.24 V is a percentage voltage drop of just 1.9%, well below our limit of 2.5%. With a resistance of only 1.5 mΩ, we should be able to load our system to nearly 215 A without exceeding our 2.5% goal. These 5-10 minute load tests resulted in almost no heat generation by the inverter/charger or any system components. I am looking forward to more extended tests to see how hot things get.

Summary: How Did We Do

Nearly three months ago, we outlined our goals for our new power center in our first post on this subject. We desired the ability to use our microwave, television, and other 120 V AC systems without having to ruin our camping solitude with a generator. In addition, we wanted to minimize the intrusion of our generator while recharging our batteries. We determined that to meet our needs, we needed several items:

We have nearly met each of these requirements. Instead of 400 Ah of batteries, we have 360 Ah, and instead of 3000 W of inverter power, we have 3000 VA or 2400 W continuous. We believe each is close enough to call this project a success. Perhaps more importantly, we learned a lot on the journey and had a lot of fun. If our RV needs to be restored to what we had before this project, here is a brief description of the required tasks.

We did a couple of things right and a few we’d do differently with the new knowledge we possess:

We’re done, it looks clean and neat, and above all else, it works!

Telescopes that slew to, and track celestial objects do so through the use of electric motors that drive their axes of rotation. Portable telescopes, like the Celestron CPC 1100 GPS, depend on either alternating current (AC) line voltage or batteries for their power. In addition, camera coolers, dew heaters and other accessories require power. The remainder of this post describes power requirements of typical astrophotography equipment and the construction of a do-it-yourself (DIY) portable power supply.

The equipment I use includes a telescope, camera and dew heaters:

This equipment and their power requirements are listed in the following table.

The reported values were obtained from vendor web sites, while the measured values were observed during operation. The total required current has a maximum value of 6.42 Amperes. The remainder of this post will describe the construction of a DIY power supply to meet these needs.

This section describes the construction of a portable power supply that meets the needs of my astrophotography equipment. This system must be portable and supply 12 Volts at just over 6 Amperes for 4-5 hours. We’ll first list the items needed and then dive into the simple construction.

This project is very straightforward and requires very few tools and a handful, a heavy handful, of parts. You’ll need a 1.25 inch hole saw or drill bit, a couple of wrenches, and scissors or a utility knife. In addition to these tools you’ll need the following items or appropriate substitutes:

Lets start with the green utility box pictured to the right. Remove the inside 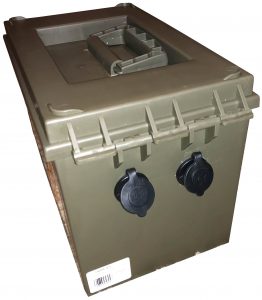 dividers and then drill two holes in one of the ends. These 1.25″ holes will enable the mounting of the 12 Volt receptacles and can be placed wherever you’d like them. Then install and securely tighten the receptacles in place.

The next step is to make a secure location for the battery to sit in the box. Place a 1/2″ layer of closed cell foam in the bottom of the utility box. Then add two 1″ thick

blocks of foam to each end with just enough space between them to squeeze in the battery. Then add 1″ thick foam on both sides of the box to hold the battery firmly in place. In the image to the left you can easily see the indentation in the bottom of the box intended to accept the battery.

The cigarette lighter power sockets include simple wiring harnesses that enable them to be easily connected to a battery. Connect each harness to 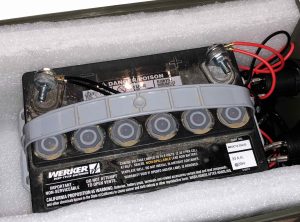 You now have a portable source of 12 Volt power. When the battery needs recharging, you simply open the lid and charge it.

In this post we outlined the need for 12 Volt power for remote astrophotography and presented a simple DIY power supply to meet the need.